The Cars - Door To Door ( 1987 Elektra ) Underrated, Sure, But Not Illogically So 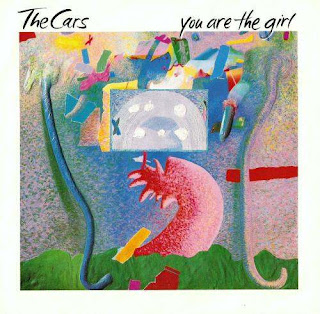 For all intents and purposes, Door To Door is the black sheep of all Cars albums. It's lyrics are somewhat faceless, inoffensive and are nearly generic in stance. Which is a shame because it doesn't have too much in common with anything else in The Cars discography. The Cars were a band that moved with the times. This was bad for a few reasons. Hair bands were all the rage at the time as was full-on bland synth-rock. So, we got Ric Ocasek's somewhat watered-down versions of both. David Robinson's big booming drums have all but disappeared seemingly replaced by the non-intrusive beeps and taps of electronic drums - regarding half of the album's songs I found myself asking the question "who thought it was a good idea to release recordings of the band accompanying a drum machine?". The Cars began as band whose sleek arrangements were to accentuate the songs. Greg Hawkes whose keyboard parts in the past generally accompanying both guitars now spill all over the arrangements - which are in and of themselves, pretty unimaginative. The only things to indicate that it is in fact a Cars album are Ocasek and Benjamin Orr's distinctive vocals.

The lead single "You Are The Girl" is inoffensive, if not anemic. "Double Trouble" is a generic Orr-sung rocker with an annoying keyboard part which is intended to flesh out the chorus. Oddly, the song ends up being a highlight. The follow-up singles "Coming Up You" and "Strap Me In" are both effective and are perhaps the best songs on the album. Re-recordings of two of the bands earliest songs ("Ta Ta Wayo Wayo" and "Leave Or Stay") sound out of place and are, not-surprisingly, inferior to their original versions. Their appearances here also indicate that perhaps Ocasek's creative juices were not flowing as freely as they had before. And the title-track is perhaps the Cars worst song, if not their worst recording of a song (again, what's with the sped up drum machine?).

It wasn't perhaps the best album to bow-out on but it's by no means a total embarrassment and certainly worth hearing (or purchasing at a discounted price). Considering they were something of a respected band - one has to wonder why the band let other musical technological fashions dictate their own as much as they did. Real drums always win in rock bands - as history has well-proven. I'm glad The Cars are not remembered for this album, but for their vastly superior prior output.
Posted by Bill Wikstrom at 7:35 AM