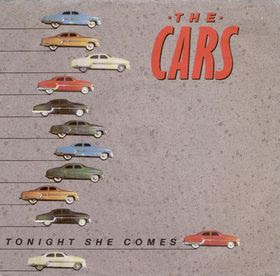 Although the band joked about calling their 1978 debut album as "The Cars Greatest Hits", this 1985 stop-gap release is a pretty okay one-stop for admirers of The Cars more popular singles. In actuality, bands like The Police, The Cars and Talking Heads had as many "turntable hits" - songs that AOR or alternative radio played as much as the label-picked singles - as they did chart hits (I personally used to hear "Got a Lot on My Head", "Running to You" and "Bye Bye Love" on local station WLIR-FM as a kid all the time). So a collection like this might leave some out in the cold. That didn't stop it from over selling six-million or so copies.

Recommended? Personally I'm not a fan of best-of's/greatest hits collections but there are exceptions - when the releases have virtual lives and identities all their own (i.e. The Beatles' 1962-1966 (The Red Album) and 1967-1970 (The Blue Album) and The Beach Boys' Endless Summer). There aren't too many from the 80's - however this might might very well be one of them. For a full retrospective get the double-disc mid 90's collection Just What I Needed: The Cars Anthology.
Posted by Bill Wikstrom at 8:04 AM