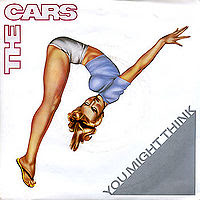 The Cars' Heartbeat City is indeed the sound of the Summer of 1984. And unfortunately many, many individual sounds on the album stayed there as well - as they were almost entirely dated by the end of that very Summer. The Cars constant employment of that weeks' sound gave much of the material on this album in particular a somewhat limited shelf-life. As so many synth sounds from this era didn't sound too amazing in the first place, it's pretty understandable that they didn't age too well either. Which is a shame as the songs themselves are fully-formed and full of life with pretty good arrangements. I've constantly wondered what exactly what David Robinson's (now a Boston-based entrepreneur) thought process was and how could he possibly think that his drum sound was improving with each successive album by solely using electronic drums (on both studio recordings and for live performances as well).

"Hello Again" sounds like Gary Glitter as performed by a bunch of tone-def session musicians. The song is great, but the choice of shrill keyboard parts leave much to be desired. And the Mutt Lange/Def Leppardesque "Hello"s in the intro are a bit much. "Drive" is a great song that can't be tarnished by bland muzak instrumentation - the chord sequence, the arrangement and Ben Orr's vocals are all perfect. "You Might Think" is a good, fluffy song with, once again, keyboard parts that I've always found to significantly detract from the overall impact of the song. Many of the non-singles (just four of ten tracks) are pretty forgettable and sound as if this is by design if not intention. "Why Can't I Have You" - which haunted FM radio when released - is a by-the-numbers synth-ballad with an ill-conceived synth-violin solo (it's actually an emulator but synth is a more convenient term of reference).

The two knock-out moments, for me personally, are the title-track which is a moody, warm and lightly emotive synth-heavy song with floating chorused-guitar parts. But because it is so understated and the choice of sounds on the synthesizer aren't seemingly attempting to win the award for most obnoxious synth sound ever the song is all the better for it. The vocals and guitar parts are purposeful and effective. The other big highlight is "Magic". Considering the first word uttered in the song is "Summer", it's not so ironic that this is a celebration-of-Summer song. It's probably one of my all-time favorite Summer songs and it was everywhere during the Summer of 1984. From the psychedelic bubbling-keyboard alarm intro to the chorused guitars and sweeter-than-sweet backing vocals. Perfect. Even the some of the dullest drum sounds ever can't taint the overall effect of the song.

As everyone knows, and if you didn't know, this album did the business.
Six singles, most of them huge hits, platinum album several times over.
But what's funny is how the more generic The Cars sound as a band became, whilst individual instrumental parts simultaneously became less concise, less sleek and larger than before, the more successful they became. The bass, and guitars all but disappeared while awful drum-sounds, emulators, synthesizers and Linn drums dominated the proceedings. These are initially not the things that made The Cars interesting.

This a necessary part of The Cars puzzle (without the hit singles there would be nothing of note here) and it's the only Cars album where the non-singles are, for the most part, entirely-forgettable. Shake It Up is most similar to this in The Cars catalog but that album is much more worthwhile than this. Whereas this album is an exercise in dated keyboard sounds trying to undo a few good singles and nearly succeeding in doing so.
Posted by Bill Wikstrom at 8:59 AM