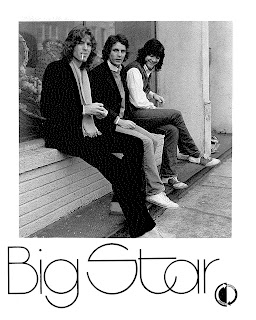 However the CD release will be a twofer of both #1 Record and Radio City with the same combined artwork as on the 1992 Fantasy Records and the 2004 SACD reissues. There will, at very least, be two bonus tracks (one per LP). That being the single recording of "In The Street" which had previously appeared as the B-Side to the "When My Baby's Beside Me" single and on the 20 Greats from the Golden Decade of Power Pop compilation and the single edit of "O My Soul". Although Radio City had several outtakes - including "I Got Kinda Lost", "Gone With The Light", "Motel Blues" and "There Was A Life" - none have been included in the reissue.

How would you know Big Star? They were fronted by the late Chris Bell and lead singer for The Box Tops, Alex Chilton. One of their most well-known songs is "In The Street", a version of which was covered by Cheap Trick for the theme song to That '70's Show. Several Big Star songs appeared in various episodes of that show on several occasions. "I'm In Love With A Girl" was recently used in a Heineken commercial. Chris Bell's "Speed Of Sound" appeared in Nick And Norah's Infinite Playlist. R.E.M., The Replacements, The Bangles and Wilco have covered their material. Not to mention The Replacements' paying tribute to the band in their 1987 college-radio hit "Alex Chilton". Who do they sound like? The Beatles, The Who, The Kinks, The Beach Boys and Badfinger in varying degrees.
Posted by Bill Wikstrom at 10:23 PM