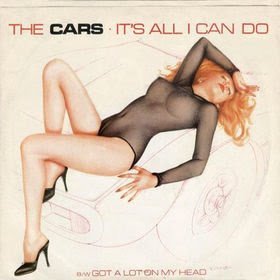 How do you top one of the greatest debuts the 1970's? Maybe you do, maybe you don't. The Cars followed their self-titled debut with the Candy-O album. The band's sophomore album is much more diverse than their debut and touches on various elements of Roxy Music, Suicide, T.Rex and David Bowie.

Plus the album contained three sizable hit singles ("It's All I Can Do", "Double Life" and "Let's Go") and a sexy Vargas Girl painting (painted by Playboy illustrator Alberto Vargas, himself).

Whereas the debut had one, albeit very enjoyable, sound for the majority of the album - each track (without too much fuss) is given it's own individual sound. The big Roy Thomas Baker multi-tracked Queen-as-per-The Beach Boys backing vocals are present from time to time but not to the extent as on their debut. "Shoo Be Doo" is something of an homage to NY art rockers Suicide. "Double Life" and "Dangerous Type" sound like New Wave T.Rex. The trippy "Night Spots", the driving "Got A Lot On My Head", and the dark brooding title-track may be The Cars at their most all-out rocking. "Lust For Kicks" and "You Can't Hold On Too Long" are both (successful) exercises in then-modern New Wave musical and lyrical sensibilities.

"It's All I Can Do" (which was a top-40 single and was later in the film The Wedding Singer) and "Since I Held You" are both great would-be ballads - the former being a great Orr vocal showcase. "Let's Go" is this album's "Just What I Needed". A monster hit still heard on the radio today and the hand-clap segment is still invariably heard in baseball stadiums at various times during games. Also of note is "That's It" (the B-Side to "Let's Go") as it's similar to both "It's All I Can Do" and "Since I Held You" - which may be why it was left off the album. It was however collected on the Just What I Needed: The Cars Anthology collection.

Candy-O arguably might be from beginning to end, song-for-song their most enjoyable - if not most interesting - album.
Posted by Bill Wikstrom at 10:13 AM