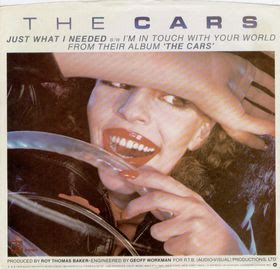 Boston, MA's The Cars contained ex-members of The Modern Lovers (which also featured Jonathan Richman and Talking Heads' Jerry Harrison), the folky and very un-New Wave Milkwood and members of comedian Martin Mull's backing band. They were an American Pub-Rock band that adapted a hybrid of Rock And Roll while carefully merging a New Wave sensibility as well. Needless to say, they were quite successful at this. The Cars may be one of the most successful debuts of the initial 1977-1983 New Wave era. The Cars contained sleek songs with sleek arrangements which is in direct contrast to the booming background vocals treated by Queen producer Roy Thomas Baker. They could be seen as the missing link between The Beach Boys and Weezer.

Rhythm guitarist and vocalist Ric Ocasek was basically an awkward New Wave Buddy Holly with songs to match while bassist and vocalist Benjamin Orr had more conventional pop idol looks and sang the more pop material. The hit singles - "My Best Friend's Girl", "Good Times Roll" and "Just What I Needed" still get lots of airplay on AOR and alternative stations. "Don't Cha Stop", "You're All I've Got Tonight" and "Bye Bye Love" were also FM hits and still get a decent amount of airplay as well. I've personally heard all-nine songs from the album on the radio at various times. And the meandering "Moving In Stereo" is pretty well known for it's appearance in Fast Times at Ridgemont High.

The album was given an upgraded deluxe two-disc treatment by those do-gooders at Rhino in the late 90's and contains studio demos of the tracks and such would-have-been-classics as "They Won't See You" and "Wake Me Up" which is easily the one to get.
Posted by Bill Wikstrom at 11:21 AM