It Was (Just About) Twenty Years Ago Today...XTC: Oranges & Lemons 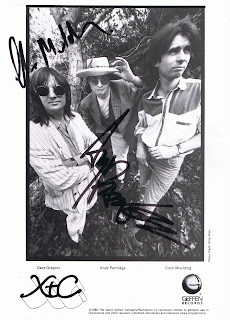 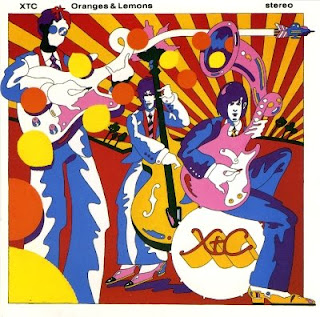 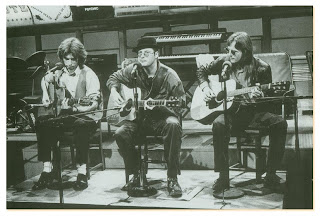 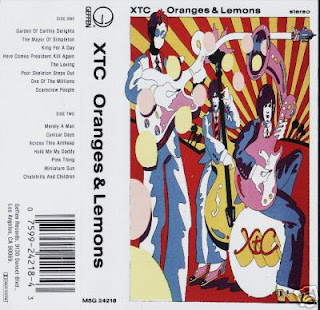 Cliched and overused as it may sound, I seriously cannot believe that it's been twenty-years since the release of XTC's tenth album Oranges & Lemons. I became a fan of XTC in a pretty random way and almost as an afterthought. I had in fact unwittingly half-knew nearly a half-dozen of XTC's songs but never really knew anything beyond the choruses for "Sgt. Rock Is Going To Help Me" and "Senses Working Overtime".

Sometime in early 1988 I was browsing through a book by Danny Quatrochi entitled The Police Confidential - a photo diary on the de facto Beatles of the New Wave. In the book there are several photos of Police founder Stewart Copeland and book author/Sting's bass tech Danny Quatrochi in which they sport several different Drums & Wires tour T-Shirts. Being all of almost twelve years-old and for one reason or another taken with the interesting T-Shirt design - I investigated just what was XT something or other? What does it say? XTC?

Upon further investigation, it just so happened that my older brother not only owned the Virgin International vinyl version* of Go 2, but the Epic Records vinyl editions of both Drums & Wires & Black Sea as well. These three albums made a tremendous impression on me and in short XTC became my favorite band. Being a fan of a critically-acclaimed fringe band at a young age is pretty frustrating. There's no name-recognition among your peers which can be a bit alienating and you're too young to fully indulge in being a holier-than-thou hipster.

XTC's then-most recent albums were Skylarking (with the controversial then-hit "Dear God") and Psonic Psunspot (the latter under their Dukes Of Stratosphear pseudonym). I went to Tower Records that Summer and bought the Geffen cassettes of everything from White Music to Psonic Psunspot and whatever used vinyl or UK import CDs I could find (aside from English Settlement & Skylarking - XTC CDs weren't available domestically until early 1991 as Geffen were desperately slow on the uptake). It was pretty much all about XTC (for the most part) for sometime.

Fast forward to all but a few months later in January of 1989. I'm watching MTV - when they were still a viable source for new music and not a reality television channel - and lo and behold I catch the world premiere video a few seconds in (just after the band/song/album/label credits) of "The Mayor Of Simpleton" and by the bridge I'm thinking that this is my new favorite band. The song is a concise Beatlesque tour de force with cyclical Beach Boys vocals and jangle Byrds guitars and a bass line that is absolutely sick. Of course, it turns out to be XTC. That day I march to local record store Sounds Alive Music and happily plunk down one dollar for the one-song promo CD single. Followed by the 7", 12" and import 3" CD singles.*

A month later Oranges & Lemons is released and I'm very seriously overjoyed. It's better than I think it would be - and even the lesser tracks ("Poor Skeleton Steps Out"...) are only lesser comparatively. It gets four-star reviews everywhere and gets significant exposure on MTV and lots of airplay on the local "new music" radio station WDRE-FM & local cool college radio station WBAU-FM. It was the first time in my life that I was able to enjoy (or simply witness) an album by my favorite band and actively enjoy the whole release & promote the singles/album process. And in XTC's case it was slightly unconventional. They stopped touring in 1982 but actually did tour for Oranges & Lemons. Only in XTC's case they went to radio stations & MTV and played acoustic mini-sets of a few songs and a few medleys. They even played the second single from the album ("King For A Day") on Late Night With David Letterman in late June. I actually got to meet them that year (very briefly) at an in-store signing at Record World in Garden City, NY - the day before their appearance on Late Night. "King For A Day" got lots of airplay as did the ill-conceived remixes that were (unbeknownst to the band) commissioned by Geffen.

"Chalkhills and Children", "Hold Me My Daddy", "The Loving" (the third and final single from O&L), "The Garden of Earthly Delights", "King For A Day", "Here Comes President Kill Again", "Miniature Sun", "Merely a Man" and "The Mayor Of Simpleton" - all from Oranges & Lemons - remain some of my very favorite XTC songs (you know, out of about a hundred or so). And in addition to a few exclusive others XTC are still my favorite band. The album is slightly dated - not horribly so - but ever so slightly. It's an incredible collection of songs and is still every bit now as good as it was then.

* Forgive such expressions of vinyl record geekdom but there's no turning back at this point.
Posted by Bill Wikstrom at 11:39 AM