The Songs Are Mine? 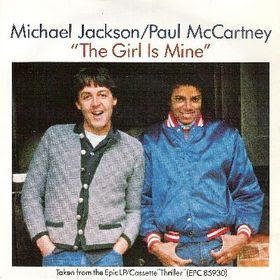 The rumor mill has been in sway since the death of Michael Jackson. In particular, regarding the ownership of The Beatles songwriting publishing catalog. Jackson purchased the lucrative catalog in 1985 from Apple Records for $47.5 million dollars.

It was Paul McCartney - who had been buddies with Jackson after the two had appeared on each others songs (Jackson on McCartney's "Say Say Say" and McCartney on Jackson's "The Girl Is Mine") - who told Jackson about the financial benefits of publishing ownership. Not surprisingly, the two had a falling-out over the matter.

Reportedly Jackson's lawyers have claimed that the rights to the Lennon/McCartney catalog may revert back to McCartney. There has also been talk of it being in Jackson's will.
Posted by Bill Wikstrom at 4:04 PM