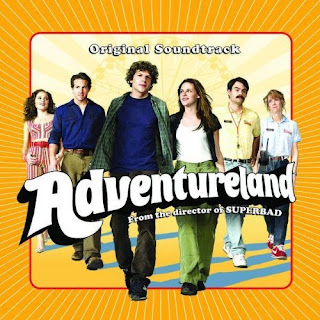 Adventureland is a new(ish) Teenage Romantic Comedy from Greg Molatta (Superbad). It's an autobiographical account of the wacky hijinks, romantic misadventures and employment experience he had in 1987 at Adventureland Amusement Park in Farmingdale, Long Island, New York.

The movie stars Twilight phenom Kristen Stewart, Jesse Eisenberg (Roger Dodger) and Ryan Reynolds. More importantly, it contains the best soundtrack I've heard in a very long time. It's also very nice to see a soundtrack have legitimately good songs from the era as well (much like The Wedding Singer), and - good or otherwise - not the just the same songs that everyone has heard way too-many times.

It contains a few surprising classics: The Velvet Underground's masterpiece "Pale Blue Eyes", Big Star's ageless "I'm In Love With A Girl" and The New York Dolls' earnestly sleazy "Looking For A Kiss". A few singalongs and a guilty pleasure or two: The Outfield's politely sleazy "Your Love", INXS' "Don’t Change" (a top contender for their best song), and the you-think-you-like-it power of Crowded House's "Don’t Dream It’s Over", the better-than-it-has-any-business-being punch of David Bowie's "Modern Love", rounded out by Falco's deeply profound high-camp masterpiece "Rock Me Amadeus".

Also present and accounted for are several legitimate American college rock (as it was then quaintly referred to) classics in The Replacements' Byrds/Dylan-via-The Sex-Pistols angst of "Unsatisfied" and the post-hardcore power of Hüsker Dü's "Don’t Want To Know If You Are Lonely" (later covered to lesser effect by Green Day). Not to mention The Cure's first Top-40 hit "Just Like Heaven" (which was everywhere circa 87/88).

Several other songs in the film did not make the soundtrack however: The Replacements' "Bastards Of Young" (which is the first item heard in the film), Nick Lowe's "So It Goes", Rush's "Limelight", The Rolling Stones' "Tops" and the sore thumbs of Judas Priest's "Breaking The Law" and "Here I Go Again" by Whitesnake.

Unfortunately the soundtrack was released for promotional-use-only in CD format (with liner notes from director Greg Mottola). There were also copies with various Adventureland T-Shirt giveaways. It is available for download from iTunes.