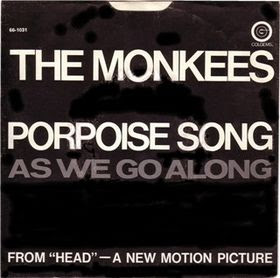 Okay, so I'm something of a small-scale vinyl junkie. I've been this way for some time now. It probably dates back to when I was only about three or four years old and getting second-hand Kiss records from various relatives. Kiss were no longer deemed "cool" by most teenage standards (New Wave and Punk Rock was) so I got them. Kiss looked like a bunch of life-sized cartoon characters. They kind of were/are. Well, throughout the 1980's my tastes changed towards new wave and punk rock ("college rock" or "modern rock" as it was known as then). But along the way I became something of a fan of The Monkees television show - which was rerun in syndication - and, subsequently, The Monkees' music. As a teenager I discovered the prefab-four's more psychedelic material (Pisces, Aquarius, Capricorn & Jones Ltd., The Birds, The Bees & The Monkees, Head and Instant Replay). I then basically became a full-fledged fan.

From their Head album - The Monkees' "Porpoise Song" b/w "As We Go Along" single may be one of their very best. The Micky Dolenz-sung, Hammond organ-heavy "Porpoise Song [Theme From Head]" is something of a lost-classic Gerry Goffin/Carole King song. It's also the complete (single) version of the song (4:12 as opposed to the albums' 2:56) with a great swirling-coda. This version also appears on Rhino's 1995 Greatest Hits collection. It also made an appearance in the 2001 film Vanilla Sky. "As We Go Along" (Carole King/Toni Stern) is again sung by Dolenz. It too is something of a lost-classic. It's warm acoustic guitar/flute arrangement make it a quintessential late 60's light-Psych piece of Sunshine Pop. The accompanying virtual would-be music video clips for these songs that are featured in the film HEAD are near-perfect visual representations of these songs (IMHO).

The single charted at an unfortunate #62, and like many Monkees B-sides "As We Go Along" earned it's own chart-placing (at a better-than-nothing #106). I guess commerce and art have always been at war. Along with lots of other near-steals - I recently picked-up this single for a measly one-dollar.

Hence this entire rereview.
Posted by Bill Wikstrom at 6:35 AM