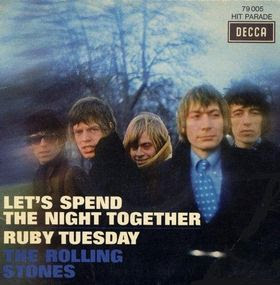 Okay, so I've come to the realization that I've been covering a lot of reissue campaigns as of late. So be it. There are a lot of things recently being "definitively" reissued. To add to that list are - hot on the heels of their umpteenth film (last year's Shine A Light) - The Rolling Stones. Their first fifteen albums - virtually all of their 1960's albums - were reissued some seven years ago. And alas, seven years later Universal Music Group (that's UMG to you and me) are reissuing everything from 1971's Sticky Fingers to 2005's A Bigger Bang.

The first four (Sticky Fingers, Goats Head Soup, It's Only Rock 'N' Roll, Black And Blue) have a release date of May 4th. The next four (Some Girls, Emotional Rescue, Tattoo You, Undercover) come out June 8th. And the next five (Dirty Work, Steel Wheels, Voodoo Lounge, Bridges To Babylon, A Bigger Bang) are to be issued July 13th.

What's that you say? I only listed thirteen? That's because UMG is going to issue the critically-acclaimed 1972 double-album Exile On Main Street sometime later this year. They're also planning to offer a collector’s box to house all fourteen releases. Although, I'm sure a large percentage of Stones fans' favorite albums have already been reissued in the first reissue campaign in 2002 - their stellar 60's work such as Flowers, Between The Buttons, Aftermath and the unfairly maligned Their Satanic Majesties Request - surely many will be pleased with the belated set of reissues.
Posted by Bill Wikstrom at 10:54 PM

Labels: Between The Buttons, Reissues, The Rolling Stones