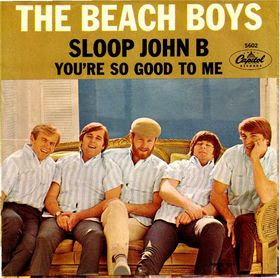 In case you haven't been made aware - from Best Buy's entire aisle devoted to it to the amount of articles covering it in every publication from Time to Rolling Stone - vinyl has in fact made a comeback. How big of a comeback has yet to be determined. Although some smaller labels have never stopped selling it, the major labels and the RIAA as well have been made fully aware of the demand for vinyl. New titles such as The Police's Certifiable and Elvis Costello & The Impostors' Momofuku have been issued on vinyl as well as several classic titles from The Beatles, Radiohead, R.E.M. and The Replacements.

Capitol/EMI have been very generous indeed. In addition to classic titles - on 180-Gram Audiophile Quality Vinyl with Original Artwork and Packaging - by The Specials, Plastic Ono Band and Roxy Music their "From The Capitol Vaults" vinyl campaign have issued The Beach Boys landmark Pet Sounds album this past September 2nd as well as the pretty-much-perfect 1974 double-album compilation Endless Summer - which went to Number One on Billboard's Album Charts, spent a whole three years on the charts and introduced the band to a legion of new fans - on October 28th. A release date of June 16th is also in the future for their stellar 1970 album Sunflower and 1971's almost-as-good follow-up Surf's Up. The title track of which may be in fact one of Brian Wilson's finest compositions and another jewel from the legendary unreleased album Smile.

In addition to all these vinyl releases Beach Boys fans have also been treated to a High-Definition Three-LP set of late Beach Boys drummer Dennis Wilson's solo album Pacific Ocean Blue (which also includes the never released follow-up Bambu) on the Sundazed label. Brian Wilson's fine new solo release That Lucky Old Sun (also on Capitol) was also given a modest, but nice, treatment complete with a gatefold sleeve.

It would be nice to see more classic Beach Boys titles be reissued on vinyl. Perhaps nice quality reissues of the over-looked classics All Summer Long, Summer Days (And Summer Nights!!), Friends and Wild Honey are imminent?
Posted by Bill Wikstrom at 12:30 AM