The Beach Boys - It's About Time (Capricorn Records 1994) 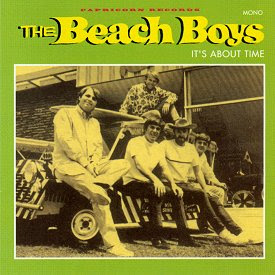 Recorded as a benefit for the Berrigan Brothers Defense Fund in support of the amazing Sunflower album and just three months prior to the release of the very great Surf's Up album this recording captures the band at a great point in their career. And also just a few years before they were proclaimed band of the year by Rolling Stone Magazine in 1974 for their reputation as great live act. The show is fairly laid-back and enjoyable, marred only by Mike Love's rambling, momentum-destroying inter-song patter. Although Dennis Wilson was doing post-production on Two Lane Blacktop (released just two months later) during this show the drums are handled very ably by Dennis Dragon. Whose brother Daryl (aka the Captain of Captain & Tennille) does a nice job on keyboards. The band plays pretty well here and the only real issue is with the occasional live recording mistakes of the era (poor mic placement, casually-mixed sound, etc).

There are plenty of great songs here that the band didn't include in their set for too long ("Aren't You Glad", "Cool Cool Water", "It’s About Time" and the amazing "Vegetables"). There's also a good selection of Pet Sounds tracks ("God Only Knows", "Caroline, No", "You Still Believe In Me", "Wouldn’t It Be Nice" and "Sloop John B"). Plus several other iconic hits ("California Girls, "Heroes And Villains", "Help Me Rhonda", "I Get Around" and "Good Vibrations"). There really isn't too much to complain about regarding the songs.

In fact the only thing that a band like The Beach Boys ever has to face in terms of scrutiny of live recordings is simply in comparing them to the studio recordings of the songs. And considering the attention to detail of the vocal arrangements, creative use of the studio and the general perfectionism of Brian Wilson in the 1960's, of course, the released studio recordings are always going be the definitive versions of the songs. Aside from the occasional sloppy performance (a decidedly shaky version of "Surfer Girl") this is a great live recording that any fan of the band should really enjoy.
Posted by Bill Wikstrom at 9:45 PM