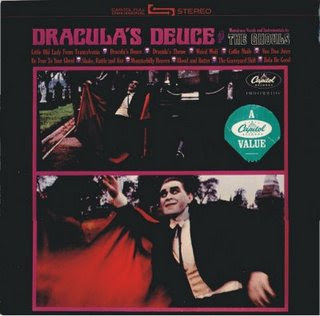 The Ghouls was a Capitol Records in-band-name-only project of producer/songwriter Gary Usher (sometime co-writer with Brian Wilson in the early 60's) featuring Richard Polodor on guitar and Rick Burns on vocals. Rick Burns sings (or talk-sings in a style not too dissimilar to "Monster Mash") faux early Beach Boys songs like "Be True To Your Ghoul" and "Dracula's Deuce" which establishes the mid-60's campy horror theme of the album. These tracks do their job just fine in creating a silly throwaway novelty theme.

However, unassumingly, six of the the twelve tracks (in fact every other track) are great, moody and very effective instrumental surf-rock songs. "Dracula's Theme" is perhaps one of the very finest slow surf rock numbers of it's kind. So good in fact that it's a shame it was released on an album such as this where the audience who'd actually appreciate it would probably never actually hear it.

"Coffin Nails", "Voo Doo Juice" and the very cool and exceptional "Weird Wolf" are variations on the reverb guitar with lots of moody organ. "Blood & Butter" and "Shake Rattle & Rot" incorporate saxophone into the mix. As for the remaining novelty-numbers "Bela Be Good" (Johnny B. Goode), "Little Old Lady From Transylvania" (Pasadena) and the "Graveyard Shift" (with a trippy little organ solo) all make much use of the phrase "grave undertaking".

Even if you've no interest in the actual album you've gotta love the psychedelic cover art with the priceless photos of Dracula posing by his wheels. Very recommended for those so inclined.
Posted by Bill Wikstrom at 7:06 PM