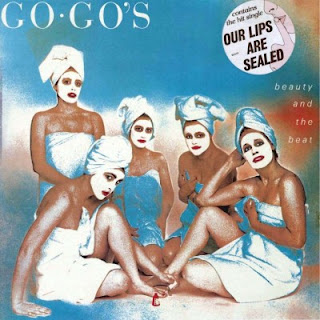 So I've been what you could call a "minor fan" of The Go-Go's for about twenty or so years. I liked selected songs by them as a small child (namely "Surfing And Spying" and "We Got The Beat"). And as an adult I purchased all of their cd's, vinyl singles and albums. In the past they have toured with several favorite bands of mine (namely Redd Kross and Too Much Joy). But I had never seen them play live until this past week at the Theatre at Westbury, in Westbury, Long Island, NY. The formerly-known-as-The Westbury Music Fair is a wonderful venue with wonderful acoustics. The stage also rotates, although the venue was not set-up as such for this particular concert.

The opening band was the LA-based The Dollyrots. They are refreshingly unpretentious and down to earth while simultaneously armed with your standard rock poses. They are a pop/punk trio and are fronted by the gorgeous bassist/vocalist Kelly Ogden. Highlights of their set included their single "California Beach Boy" as well as covers of Melanie's 70's chestnut "Brand New Key", an accapella rendition of "As Long As We've Got Each Other" (aka The Growing Pains theme song) and Joan Jett & The Blackheart's "Bad Reputation". The band is currently signed to Joan Jett's Blackheart Records. The band is rounded out by Luis Cabezas on guitar (whose rhythm guitar parts were somewhat reminiscent of Joan Jett) and the exceptionally tasteful drumming of Chris Black. A fine opening band, overall. 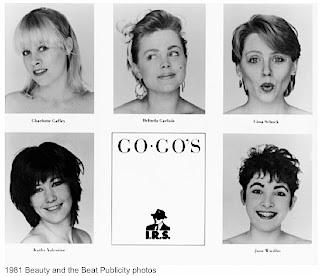 The Go-Go's 'Ladies Gone Wild Tour' is ostensibly to celebrate the 30th anniversary of their debut album, Beauty And The Beat. It was recently reissued as 2CD & 2LP sets with previously unreleased concert recordings and a remastered original album on pink vinyl. It was also touted to be their farewell tour, but Belinda Carlisle has since said that they will, indeed continue to perform after this tour ends.

The band were wonderful and were in better form than I aticipated. Drummer Gina Schock is a workhorse and bassist Kathy Valentine - who looked fantastic - was obviously enjoying playing the songs, again. Pixie-like rhythm guitarist Jane Wiedlin danced laps around the stage while lead guitarist/sometime keytboardist Charlotte Caffey, the grounding force, was excellent as always. Onetime-punkrock cheerleader Belinda Carlisle was also in fine form, leisurely hitting her notes as always. 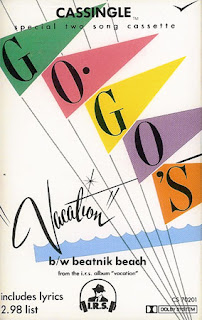 The band was obviously well-rehearsed and sounded fantastic. They performed everything you'd expect to hear (except maybe the mid 80's hit "Turn To You") and perhaps didn't expect to hear (the Sparks/Jane Wiedlin single "Cool Places" and Belinda's Go-Goesque solo single "Mad About You"). The only songs from Beauty And The Beat they didn't perform were "You Can't Walk in Your Sleep (If You Can't Sleep)" and the fine album closer "Can't Stop the World". Nor did they delve into anything non-singles from the truly underrated Vacation album, nor anything from the long out of print Talk Show album.

They were selling the vinyl reissue (which I personally passed up as would've been my fourth copy) and ton of cool gear including a blue shirt with the Beauty And The Beat album cover and dates on back. I'm really glad I saw the band as they were unexpectedly very good.

Big Special Thank You to Michael McIsaac.
Posted by Bill Wikstrom at 11:12 AM