The Clash: Westway To The World 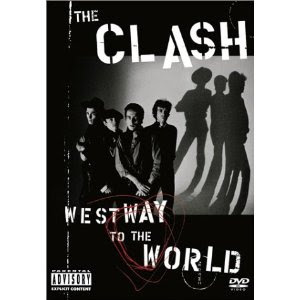 
The Clash may have been one of the most interesting, important and best rock bands to have ever existed. And this documentary does in fact support that theory. However, the selectiveness of the subjects discussed leaves much to be desired. Hindsight, as they say, is 20/20 - and in the case of the people responsible for this documentary - it's also very revisionist.

There is absolutely no mention of the post-Mick Jones Clash that existed from 1983-1986. Four years of a bands history is an awful lot of time to simply not feel like mentioning. Sure the album this band produced - 1985's Cut The Crap - may not have been on par with say London Calling but few albums are. To completely fail to not mention it makes me wonder why the filmmakers would simply choose to re-write history as if it never existed. All this does is support the fact that documentaries edit history any way they want. The unmentioned band (Simonon/Stummer/Pete Howard/Vince White/Nick Sheppard) toured the US in 1984 and also did a busking tour of England in 1985. By not mentioning them at all does no favors for any new young fan who actually wants to know about The Clash's actual history and not just what was graciously selected and edited for them.

Then there is the issue of obtaining great rare footage only to have mere seconds of it peppered throughout the documentary! This seems to be the biggest complaint from everyone I know who has seen Westway To The World. To not add any of this footage (i.e. The Clash playing both songs on SNL/Their appearance on Friday's/Tom Snyder/US festive footage/etc) is simply a snub to the band and its fans. All this does is leave bootleggers with even more viable footage to sell (and none of this made it way to the Special Features portion of the DVD either).

Having said all that it Westway To The World is a welcome documentary. The Clash did have an MTV Rockumentary in 1991 with some great interview footage (arguably superior to the interviews here) and great footage of the band circa-1979 that could've been used here but were not. There is however, the bonus material of all the existing footage for The Clash On Broadway. Footage of which the reason why so little exists is because Topper took out an injunction so that film never be released. Since it was never finished (because of the injunction) most of it was thrown away or deteriorated since it would never see the light of day anyway. Gee thanks Topper - now we really see you in a positive light!

The Clash and director Don Letts won a Grammy for 'Best Long Form Music Video' for this feature documentary.
Posted by Bill Wikstrom at 12:00 PM