The Police Confidential by Danny Quatrochi 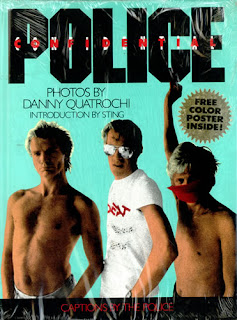 Great companion to the Lynn Goldsmith Police books (The Police and The Police: 1978-1983) at very least.

Danny Quatrochi - Sting's right-hand man (bass technician) from New Jersey and Police roadie - put forth a fantastic book. If anything it's too short considering all the Police photos he's taken. He's one of them, so you get a lot of photos with The Police's guard down.

Embarrassingly, the back cover photo of Danny (and his awesome shirt) was how I was introduced to XTC in late 87/early 88. He was sporting a dark Drums & Wires shirt which made me think - "that's a cool shirt - what does it say exactly?". So I have Danny to thank for me becoming a huge XTC fan, unbeknownst to him.

Thanks for the cool pics of Andy, Stewart and Sting Danny - and XTC rules.
Posted by Bill Wikstrom at 11:42 AM