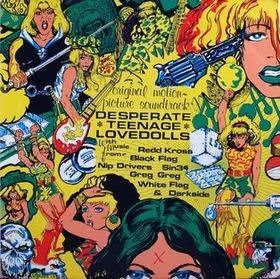 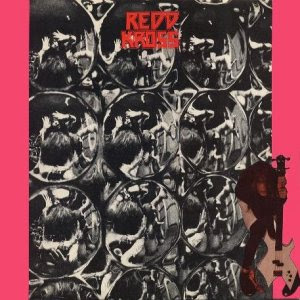 Desperate Teenage Lovedolls is perhaps one of my all-time favorite films. I remember picking this up at Tower Records in the Summer of 1997 (a pleasant surprise indeed as I had no idea this had been released on CD). Good liner-notes and photos but the cover art is altered for some misguided reason as the original was pretty ace. I have to say this soundtrack is nearly an aural photograph of the last gasp of the early 80's LA punk scene. It's perhaps even more effective than many purposeful compilations could be as it's seemingly unaware of what it is capturing. Half of this soundtrack are purely Redd Kross tracks. Some of which have only seen release here ("Out Of Focus", "Legend" and the original version of "Ballad Of A Lovedoll"). Lone tracks by Black Flag, DTLD director Dave Markey's band Sin 34, and a wonderful acoustic track by Bad Religion frontman Greg Graffin and ex-Redd Kross guitarist Greg Hetson (billed on the original LP as Greg/Greg) called "Running Fast".

Here's the rub (someone had to screw this up I suppose), every single track is prefaced with dialog from the film (or faux applause)...on the actual track itself!! The ending of "Ballad" also overlaps entirely onto "Legend" (but not without an asinine soundbite from the film - lest we forget about the film for two minutes). Talk about a shortsighted idea. This is the sort of thing that may have been funny, once, to the people involved (and rightfully so - some of the dialog is classic). But any sort of momentum or cohesiveness is virtually ruined for anyone who wants to listen to this soundtrack more than once. Which is a real shame because the songs work so well together and probably flow better than they have any business to. Other mid 90's soundtracks did this too (Mallrats, The Brady Bunch Movie, Friends, etc). The popularity of this heinously obnoxious act was thankfully short-lived.

One wonders what the compiler of this soundtrack was even trying to achieve with such a seemingly crass, if not self-indulgent, act. Their only real intention was that of selling the film to the purchaser of the soundtrack - if that person didn't already own the home video (doubtful) or know anything about the film (again, doubtful). Sell, sell, sell I guess.
Posted by Bill Wikstrom at 2:27 AM