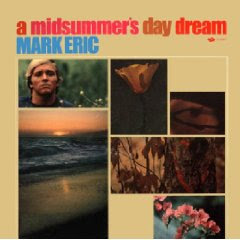 The UK label Now Sounds has recently reissued the lone album offering by Mark Eric Malmborg - 1969's A Midsummer's Day Dream. An album of absolute Southern Californian soft-pop greatness. Malmborg was musician, model and actor based in Hollywood in the late 60's. He made scattered appearances on television shows like The Partridge Family amongst others. While this is really of no interest other than idle trivia, the real matter of import is A Midsummer's Day Dream - one of the lost slices of pop perfection from late 60's Southern California.

A warm blend of mid-60's Brian Wilson-informed Sunshine Pop - namely Pet Sounds-era post-surf pop Beach Boys. With lots of warm backround vocals, soft french horns, accentuating stings, ever-present vibraphones and a seemingly even combination of Mike Love and Brian Wilson vocals as per the adenoidal Malmborg. I'm not so sure I've heard an album that, immediately upon first listen, is so accurately represented by it's cover art - photos of a beach at dusk, scattered flowers in fields, a blonde-coiffed dude (Mark Eric) amongst yet more flowers. All in a small collage reminiscent of The Beach Boys' All Summer Long album.

The songs. "Where Do The Girls Of Summer Go" is an absolute classic, lyrically overlapping the Beach Boys songs "Caroline, No" and "The Girls On The Beach". "Laura's Changing" again takes the girl-all-grown up theme of "Caroline, No" and mixes it with yet another Beach Boys song, "The Little Girl I Once Knew". You'd be forgiven for thinking that the gorgeous "Take Me With You" was a Pet Sounds outtake. Really. The triumvirate of "Move With The Dawn", "Night Of The Lions" and "We Live So Fast" all celebrate (or simply discuss) the fast swinging lifestyle of hipsters in the late 60's. At times sounding simultaneously ultra-naive and dead-on accurate whilst being complete and unwitting snapshots of a long-bygone (but much celebrated) era.

The Now Sounds reissue - which contains great sound-quality, twenty pages of liner notes (with song by song commentary by Marc Eric himself) and sixteen bonus tracks - totaling at twenty-eight - should do more than appease the curious, let alone a fan of the classic A Midsummer's Day Dream album.
Posted by Bill Wikstrom at 5:27 AM